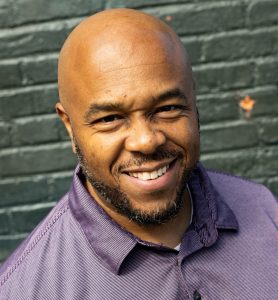 Charles Anthony Burks is an award-winning actor/writer/ comedian/professor. He received his MFA in Acting from Columbia University and his undergraduate degree a BA in Theater and Mathematics from The University of Virginia in Charlottesville, V.A.  He is a the Co-Coordinator of the Theatre Program/ Assistant Professor faculty member of the Borough of Manhattan Community College. He is also the creator and Artistic Director of Enigma Acting Conservatory. As a writer, he has written for The Dave Chappelle Show (Season 1), Rockefeller and an NEA Grant Recipient for Lyrics and Composing a Theaterworks USA Hip-Hop Musical called Hater High, OMG a Cyberbullying Story. As an actor, he has performed in The Bomb-itty of Errors on The West End of London (Ambassador’s Theater), Edinburgh Theater Festival (Best Ensemble Acting Award). Othello Remix off-Broadway (Westend Theater) Television Credits include: “The Chris Rock Show” (HBO), “The Sopranos” (HBO), “Hack” (CBS), “Home Court” (Nick-At-Night) and “Celebrity Deathmatch” (MTV).  Films include: “Get Rich or Die Tryin” (Columbia Pictures), “A Place Beyond The Pines,” “Theresa Is A Mother” (Cannes Film Festival), “Balk” (BAM Film Festival) and “For Love of The Game” (Sam Raime, Dir.). He currently resides in New Jersey with his wife and children.

Share the Artful Power of NCBRC and Black Theatre with Your Community! Choose Your Platform...